LOS ANGELES (KABC) — The Los Angeles Police Commission meeting was twice interrupted on Tuesday by people protesting drones and continued funding being approved for the cadet program.”Three hundred and eighty thousands dollars to do more of the same,” one man said during the meeting.

The commissioners had to leave the room due to the protesters, and one of the men threw his notebook at the commissioners. Others stood up and began chanting, “Fire Chief Beck.” The meeting resumed at about 10:45 a.m.

The LAPD cadet program has been plagued with problems, including a scandal involving a veteran officer and an underage girl. But Chief Charlie Beck has said that the program is “here to stay.”

The original reason for the protest was a presentation and discussion of a proposal for a pilot program using drones. About two dozen protesters held signs before the meeting outside police headquarters to say that LAPD should not be using drones as a tactical tool.

“None of the communities of color were surveyed to see if they were OK with this drone situation,” said Martha Camacho-Rodriguez, a special education teacher.

Beck said today was only the beginning of the discussion as to where and how drones would be used. Since the L.A. County Sheriff’s Department began using them in January, deputies have used them for search and rescues.”

“For more than three years, a pair of drones donated to the Los Angeles Police Department were locked away, collecting dust after a public outcry over the idea of police using the controversial technology.

Seattle police saw a similar backlash when they wanted to use the devices, grounding their drone program before it even took off. And recently, the Los Angeles County Sheriff’s Department’s use of a drone has been criticized by activists as well as civilian oversight commissioners who want the agency to stop.

On Tuesday, the LAPD again waded into the heated debate, as department brass proposed testing an “unmanned aerial system” during a one-year pilot program.

Assistant Chief Beatrice Girmala told the Police Commission that the idea was to use a small drone to help officers during certain types of incidents, such as and reports of potential bombs or active shooters. The devices, she said, could help gather crucial information as such situations unfold, without putting officers at risk.

The LAPD would draw up clear guidelines before flying the drone and each use would require the approval of a high-ranking department official, she said.

Before the meeting, roughly three dozen activists from various groups — including the Stop LAPD Spying Coalition, Black Lives Matter and Los Angeles Community Action Network — stood outside the LAPD’s downtown headquarters, denouncing the use of drones by police.

”L.A. does not need further militarization by the LAPD,” said Paula Minor, an activist with Black Lives Matter.

Drones have been hailed by law enforcement across the country as a crucial technology that can help find missing hikers or monitor armed suspects without jeopardizing the safety of officers. But efforts to adopt the unmanned aircraft have frequently drawn fierce criticism from privacy advocates for whom the devices stir Orwellian visions of inappropriate — or illegal — surveillance or fears of military-grade, weaponized drones patrolling the skies. 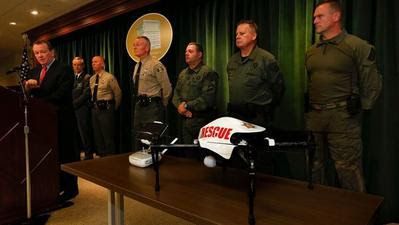 “People are concerned because they associate the drones that police might be using with the drones that are being used by the military,” said Dan Gettinger, codirector of the Center for the Study of the Drone at Bard College. “The word ‘drone’ just has that implication.”

Almost 350 public safety departments in the U.S. have acquired drones, nearly half of them last year, according to a study Gettinger’s center published earlier this year. Many of those drones are no more advanced than those used by hobbyists, he said.

Some agencies have adopted the technology without much public reaction. Still, Gettinger said, skeptics have expressed apprehension not just about how police use drones today, but how they might use the technology in the future.

“We’ve just hit the tip of the iceberg,” he said. “The systems are going to evolve, and that’s going to bring with them questions about how they’re going to be used.”

In an attempt to strike a balance between privacy and public safety, more than a dozen states have adopted rules requiring law enforcement agencies to obtain warrants before using drones to conduct surveillance or searches, according to the National Conference of State Legislatures. A similar proposal by the California Legislature was vetoed by Gov. Jerry Brown in 2014.

The LAPD’s dance with drones began in 2014, when the department received two Draganflyer X6 drones from police in Seattle — drones the Washington agency unloaded after heavy criticism from the public.

Although the LAPD said it would deploy the drones for “narrow and prescribed uses,” civil liberties advocates questioned their use in even a limited fashion. 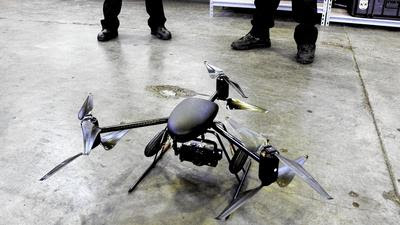 Less than a week after getting the drones, LAPD Chief Charlie Beck said he would not fly the unmanned aircraft until the department had sought public feedback as well as approval from the Police Commission.

“I will not sacrifice public support for a piece of police equipment,” Beck said at the time.

The drones were then locked away in the office of the LAPD’s inspector general. Department officials said the move was a response to public perception and federal laws limiting use of the unmanned aircraft.

Earlier this year, L.A. County Sheriff Jim McDonnell announced his agency’s plans to use a $10,000 drone to help deputies responding to arson scenes, suspected bombs and hostage situations. McDonnell said the drone would not be used in surveillance but could provide critical information from previously inaccessible vantage points.

Civil liberties advocates expressed concern over privacy as well as what they described as a lack of public input in the sheriff’s abrupt announcement. The Stop LAPD Spying Coalition staged a protest blasting the department’s use of drones.

On July 27, the majority of the Civilian Oversight Commission also expressed their desire for McDonnell to stop flying the drone, citing concerns over surveillance and safety.

The Sheriff’s Department still plans to use its drone, a spokeswoman said Monday. Deputies flew the device last week, she said, during an East L.A. standoff with a gunman who shot two people and refused to surrender.”